Where in the world is Sharjah?

I pose my question in this post's title because the near universal response from people is bewilderment when I tell them I will be traveling to the Sharjah International Book Fair.  When I say Sharjah, they nod knowingly, then stop themselves and look at me with a blank expression, finally saying: Where?

This will be my 5th trip to Sharjah, it is in the UAE - very close to Dubai, only about 50-60 miles from Abu Dhabi.   Sharjah International Book Fair is a ten-day international book fair held annually. The Fair started in 1982 and is the largest and most important book fair in the Middle East, getting 20,000+ visitors a day.  My friend Ahmed Al-Amri is the Fair Director and continues to innovate and expand the program and opportunities for publishing professionals, expanding beyond the traditional role a public book fair serves in any modern and literate culture.

I look forward to attending and have a full schedule.  BEA will post info from Sharjah via the BEA social channels next week share interesting of the happenings from the fair.  Below is a sampling of the professional program.

It is not a secret that BEA will be in Chicago in 2016.  There is a tab with Future Dates in the Show Info drop down where this has been posted for almost 2 years.  It has been interesting as people inquired about the rumor that BEA is moving to Chicago...

To be fair, this has not been overtly promoted, making it understandable that BEA in Chicago in 2016 is not common knowledge.  It is not a rumor, it is fact.  Still that is 2 1/2 years and 3 show cycles away.   BEA's present focus is on a few core items that insures BEA remains a compelling and critical event for the whole industry.  The biggest two are:


That is deeper fodder for another time, this post is all about the WHERE for BEA after 2016.  We are asking the question and doing the due diligence on where BEA should be after 2016 so that continues to be the best event possible for the most people.  There is a quick survey at the top of this page.
Please weigh in with your vote
HOWEVER, before you do vote, I ask that you to sit in my seat for a minute and weigh all the factors to be evaluated to make a decision that serves the most people best.
We are here because people are increasingly voicing the sentiment that BEA needs to move from New York for a variety of reasons - one being needing variety away from NYC and the big one being the cost of NYC. Make your voice heard, but also think of all the voices and the needs each constituency has vested for participating in BEA.

The fall publishing season always falls into pre-Frankfurt or post-Frankfurt on many calendars in terms of availability for people in the publishing business.  I am happily in the post Frankfurt mode, getting home this past Saturday in time to take in NY ComicCon with the family (not sure which of the two was more arduous...it might be a tie).  Still, following Frankfurt, which I had 25+ planned meetings and innumerable chance meetings and my team had more than 120 scheduled meetings,  BEA now has a ton of great things to follow up on that are going to be part of BEA's success in 2014.  By any measure - it was a fantastic show.

I have complained here before about the headline hysteria that goes with BEA's attendance going up or down.  I understand that is the metric in which people judge a book fair (or almost any trade event) and that it is not an unfair measure.

HOWEVER, the content of the meetings and quality people along with the business results are all that matter.  Conversely the glowing headlines that come with SXSW - where attendance is through the roof, I found I struggled to get into sessions I planned for because of there were too many people and missed people who could not get around because of the crowding.  That could be simply fixing logistics, but the fact is it impacted the value I got for participating in SXSW, diminishing it greatly.  Even so, there was a greater diversity of people at SXSW and it took a lot of time for me to figure out that many of them were people that had no value for me (nor was BEA of any value to them).  The point is - if a little is good, is a lot always better?  I am not disparaging SXSW, but it is not worth it for BEA and we are not going to go back at this point, just no ROI.  If I was in marketing or tech, I would feel differently, but just because they had great growth does not mean it is a great event for everyone.

The BEA team had a terrific fair in Frankfurt, we saw the people we needed to see, we had great meetings, we generated a ton of interest from new people that have not attended or exhibited at BEA.  It was reported that Frankfurt is down by nearly 10,000 trade people since 2009.  To provide some context - BEA's press number was down by more than 300 people this past year.  For BEA it was a concerted effort to improve the quality of the press attending and the feedback BEA received was that this made BEA more effective with the quality of the press noticeably improved.  People should consider that the erosion of 10,000 trade people from Frankfurt are people they probably never met nor did they ever need to meet with and that was 10,000 less people in their way of getting to a meeting in Hall 6 or standing in line for a bratwurst.  Sometimes, less is more.  Despite the headlines, the BEA team will be following up for the next 2-3 months with meetings from a very productive fair and will no doubt be in Frankfurt again 2014.


BEA Team Heads Off to the Frankfurt Book Fair:
A good portion of the BEA team will be at Frankfurt next week, please stop by our stand in Hall 8, Stand J37.  We have beer, water and apple wine for any visitors + plus a joke or 2 to lighten your mood. 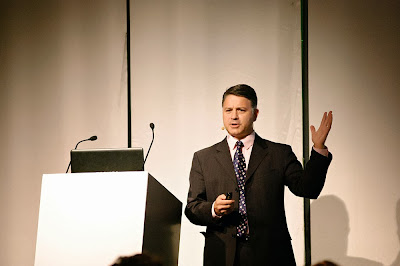 This photo was from my presentation at the Exhbitioniste program, which was organized by:  www.fondazionefieramilano.it, www.regione.lombardia.it http://www.mi.camcom.it  www.meetthemediaguru.org I want to thank everyone for a great program.  I do look angry, but I assure you - I was anything but.

Follow Up on Dave Holton:
Friends and Family are invited to a Celebration of Life for Dave Holton on October 20, 2013 from 4 PM to 6 PM at Jennette's Pier in Nags Head, NC. In lieu of flowers, contributions may be made to "Beyond Pink", attn: Jarie Ebert, Outer Banks Hospital, 4800 S. Croatan Hwy, Nags Head, NC 27959 or to a charity of your choice.

“Great things are not accomplished by those who yield to trends and fads and popular opinion.” Jack Kerouac

Followers of the BEAN